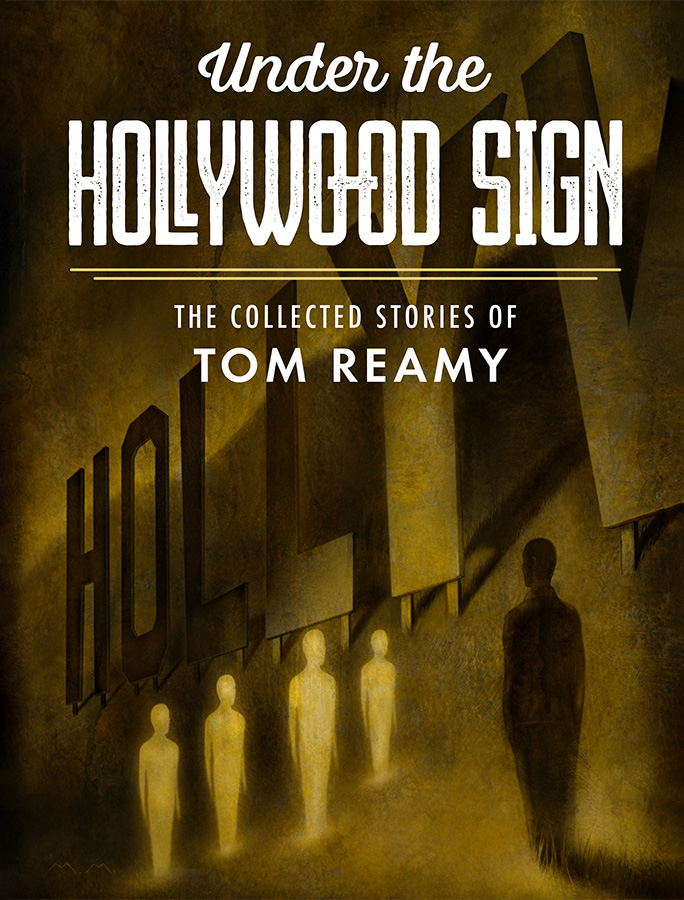 George R. R. Martin once wrote of Tom Reamy that he “brought to his first efforts such a store of talent, keen observation, and knowledge of humanity that he seemed to spring into being as a major writer full-bloom.” For his sensitively rendered yet darkly gnawing fiction Reamy has been compared to Ray Bradbury, Theodore Sturgeon, Richard Matheson and Jack Finney.

Gathered here for the first time in Under the Hollywood Sign is all of Tom Reamy’s professional short fiction, including two previously uncollected pieces: the story “M is for the Millions” and the screenplay “Sting!”, as well as a previously unpublished novella.

Reamy sold his first two stories, “Beyond the Cleft” and “Twilla,” to Harry Harrison and Damon Knight respectively—on the same day in 1973. “San Diego Lightfoot Sue” earned Reamy the 1975 Nebula for Best Novelette, and, following more nominations, Reamy won the 1976 John W. Campbell Award for Best New Writer. Tragically, he died at the age of forty-two in late 1977; his posthumously published novel, Blind Voices, garnered further acclaim. George R. R. Martin noted that, along with John Varley, Reamy was one of “the two most important new writers of the Seventies,” and this definitive retrospective of Reamy’s supernova career showcases why.

Ranging from the survivalist science fiction of “Dinosaurs” and “2076: Blue Eyes” to the undeniable horrors of the eponymous story and “The Detweiler Boy,” these dark, consistently seductive tales by a mercurial fantasist easily shift from urban noir to rural romance, from private eyes to cosmic fears, from creature features to slice-of-life, from bittersweet realism to existential slipstream.

Closing out the collection, in what we might irreverently call the pièce de réamysistance, is that long-awaited, never-before-published novella “Potiphee, Petey, and Me,” penned more than 45 years ago and now exclusively available in this volume. Offbeat, disturbing and prescient, it conclusively brings to the fore why, no matter where we might be reading from, we’re all living Under the Hollywood Sign.

Now Shipping!The signed limited edition of Kevin Hearne's Hunted, the sixth installment in the Iron Druid Chronicles is in stock and shipping.Nothing emphasizes the need for good cardio so much as being tracked by two goddesses of the hunt and their hounds. Having barely escaped from Mount Olympus and blocked from shifting planes, Atticus, Granuaile, and Oberon must run across Europe in hopes of an assist f
read more
Hailed as the first modern psychological thriller, The Collector is the bestselling novel that catapulted John Fowles into the front rank of contemporary novelists.When Frederick, a lonely clerk who collects butterflies, sets his gaze upon Miranda, a beautiful young art student, he discovers something more beautiful, rare and precious than any butterfly he’s ever seen. Disturbing, engrossing, and utterly un
read more
One way to get a sense of a career-spanning collection, such as Stephen Gallagher's Comparative Anatomy, is to have a look at the different voices and techniques on display. Here then are the beginnings of a number of stories in this mammoth (over 560 pages) collection:Twisted Hazel(excerpt)From the window I can see them coming and going. They’re not the same people as before. Most of them are men, though I
read more
We're pleased to announce Jeff Vandermeer's Hummingbird Salamander, which landed starred reviews from Publishers Weekly, Booklist, and Kirkus. Our edition will be printed in two-colors throughout, and include a 28 page bonus section, a mix of text and images, which features a two-page full-color spread.About the Book:What if the world ended, not with a whimper, but with the stilling of a bird’s wing?In Humm
read more
We’re pleased to announce To Blackfyre Keep by Anthony Ryan, another epic fantasy novella by the author of the Draconis Memoria trilogy.GUYIME—DEMON CURSED WIELDER OF THE NAMELESS BLADE—FOLLOWS THE TRAIL OF THE FABLED SEVEN SWORDS INTO THE TROUBLED NORTHLANDS, A REALM WHERE HE WAS ONCE CALLED KING…AND RAVAGER.Magically guided to enlist in the retinue of a lovesick knight, Guyime and his companions journey t
read more
We have three signed limited editions by Lawrence Block, already at the printer, due out this summer.— Lucky at Cards— Killing Castro— A Diet of TreacleThe trio are early novels, brought back to light by Hard Case Crime after decades out-of-print. We're please to shed a bit more light on them in their first hardcover appearances. The three titles will be published (and shipped) at the same time.
read more
It's our pleasure to announce Comparative Anatomy: The Best of Stephen Gallagher, in which one of our finest dark fantasists gathers over 500 pages of tales that span a career now in its fifth decade, and includes two stories written especially for this volume.Special Offer: Those who preorder Comparative Anatomy from SubPress will receive an ebook of the original novelette, "Hounded," about which, the auth
read more
Lois McMaster Bujold's new novel, The Assassins of Thasalon is selling briskly. We've updated the book's product page with a very short excerpt. As a reminder, we will not be making The Assassins of Thasalon available to large online retailers.Speaking of Lois, we still have copies of a number of her previous novellas. We've received a number of orders of late for a bunch of her titles, as readers catch up.
read more
!